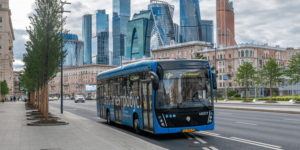 Moscow will stop buying new diesel buses this year and will henceforth only procure electric buses. This was announced by Mosgortrans, the operator of the bus and tram network in the Russian capital. By the end of the year, 1,000 electric buses are to be in use.

As reported, the bus fleet in Moscow is to be completely converted to electric buses by 2030. According to Mosgortrans, there are concrete plans to convert the fleet to more than 2,000 electric buses and to install 372 additional charging stations for electric buses initially by 2023 in order to increase their number to more than 500 within two years.

“Starting this year, by the decision of the Mayor of Moscow, we will not buy diesel buses, except for transportation in a special mode. Only electric buses. We will also install about 200 electric charging spots a year for the development of personal electric transport,” Makim Liksutov, Moscow’s deputy mayor for transport, was quoted as saying in an emailed statement we received.

In February, it was reported that Moscow already has about 600 electric buses on the road and plans to add 400 more by the end of the year. For 2022, the procurement of another 420 vehicles is planned, followed by another 855 electric buses, the report continued. At the same time, the existing internal combustion buses are to be removed from the fleet. However, Artyom Burlakov, deputy head of the department for innovative projects at Mosgortrans, did not give details about the procurement programmes and the vehicles used to the news agency. So far, Mosgortrans has been using vehicles from GAZ and Kamaz.

Kamaz had announced its own electric bus plant near Moscow in 2019, which opened in April this year. The production facility is located on the territory of the Sokolniki Auto Repair and Construction Plant (SVARZ), a branch of Mosgortrans. In a first phase, an assembly line for the production of up to 500 electric buses per year was put into operation at SVARZ. In a second phase, another production building is to be added, which will enable the production of around 200 more electric buses per year and the maintenance of the equipment. The background is that Kamaz “bears full responsibility for the maintenance of the equipment for 15 years”, according to Mosgortrans.

The “Moscow electric bus”, as Mosgortrans calls the vehicles manufactured in SVARZ, is one of the best on the world market in terms of technical and operational characteristics, the company claims wholeheartedly. “And this while it is 30% cheaper than models of electric buses made by other world manufacturers, e.g. Polish and German companies.”