Skip to content
Manny Khoshbin is worth $80 million, a large chunk of which is tied in real estate and one of the most enviable, uniquely customized car collections in the U.S.. Whereas other celebrities (same Jenner and Scott) buy cars just because they look good or they’re more likely to generate headlines because they’re the newest releases, Manny buys them out of love.

This is what makes the sight of a Tesla next to one-off Bugattis, Paganis and McLarens a less unusual one. Manny, the man who once called the Veyron the “basic” Bugatti and who said that he doesn’t buy Lamborghinis because they’re not “exclusive enough,” is now the owner of a new Tesla. He’s had one before, a Model X, but he sold it after someone rear-ended him and he didn’t want to deal with a fixed car, even if it was only cosmetic damage.

Today, Manny has not one, but two Tesla Model S Plaid. He’s showing one off in his most recent video, explaining how he had initially signed up for the Plaid+ version that Tesla CEO Elon Musk eventually canceled. Unsurprisingly, he loves it.

Seeing Manny at the wheel of a production, series car is strange, even if that car comes with a price tag of $140,000. That’s a drop in the bucket for the man who pays on average some $1 million on customization only. Even stranger is seeing him so giddy and excited at everything the Tesla brings to the table, from the larger screen and the many available video games, to the insane acceleration through Cheetah Mode, and the way unique way of putting it into drive or reverse.

Manny does have criticism of the Model S Plaid, including how it should benefit from an exterior “that matches what’s under the hood” in terms of performance, and the yoke-like steering wheel, which he feels should be optional.

Musk could make the car more “prominent looking” because it deserves to be, since it “blows everything else out of the water,” including his entire fleet of Bugattis and other hypercars. “To think that it would beat every single car that I have in my fleet is unbelievable,” Manny says. “This thing is amazing. It really zaps through like nothing, like a knife through butter.”

That’s incredibly high praise. Here’s the test drive with all the action. 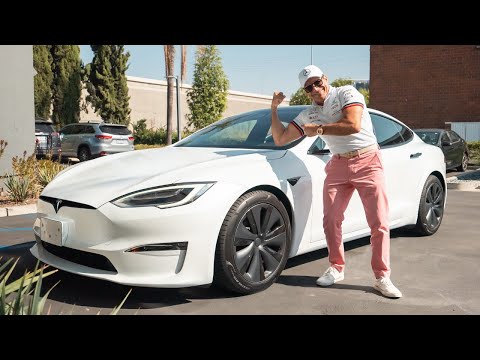